Why I am enjoying Rifts (again). 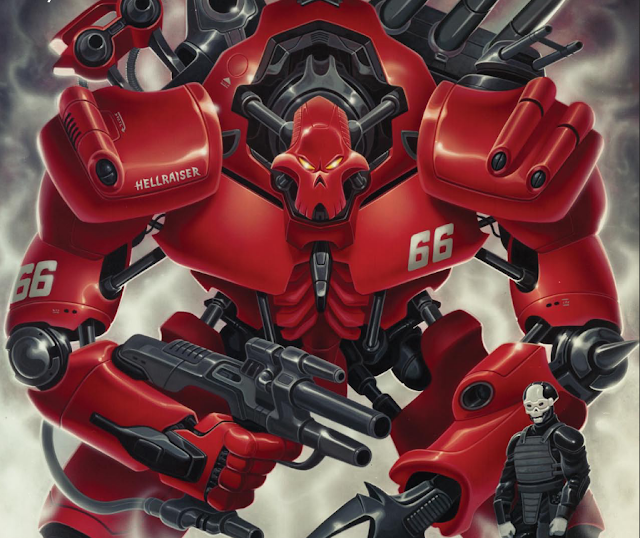 Well I have to say as I am re-reading the RIFTS game I am really starting to fall in love with it all over again and I am not quite sure why I stopped playing after the '90s.

Maybe it was the lack of people who I could find to play this game or maybe it was the fact that everyone kept telling me it was a game for power gamers and munchkins, with little to no story.

Its no secret I enjoy games with more story and less mechanics, which is why I most play games like Advanced Dungeons & Dragons 1e (its not D&D 1e, stop it), Marvel FASERIP, DC Heroes and Classic White Wolf games.

Palladium is not that heavy of a system on mechanics, its probably on the medium end of things, but it has a lot of story to tell and with the right GM (ehem, me) it can be a game about survival, a story about humanity surviving the threat of all these beings invading their home world.

I guess its easy to relate to this theme and type of story these days.

BUT one thing I enjoy is having an amazing bad guy in RIFTS, no its not the aliens beings or weird creatures, its actually the Human Coalition, or from their point of view its not, they are just serving humanity.

Let's take a look at them for a second:
What more can you ask for in a bad guy who thinks they are the good guy?

Any good Game Master knows in a story you need quality bad guys, and these guys are quality. They aren't just faceless bad guy, they have a purpose, they have a story and you can easily pick up the sourcebook to read more about it.

Okay you are probably saying, "yeah yeah, they just seem like an evil empire, so what?"

While it may seem like that and from the top, (and it basically is an evil empire) but you have to realize, the soldiers aren't fighting to be horrible people in the world, they are fighting to protect their families from the horrors humanity never had to see prior to the Rifts opening up.

They see it as, the world was fine and suddenly these Rifts opened up and all these evil creatures came in, destroying and killing mankind.. the natural response is to form a coalition with the strongest members to fight a common enemy, once that threat is done with, then we worry about fixing things internally and during this extreme situation, its perfectly justified, for the most part.

Anyhow they make for a great bad guy for your campaigns, maybe your player characters can be a part of the coalition and then realize "what the F am I doing here?" breaking away, going on the run, and convincing others to join them in a rebellion against the coalition and it will become a hell of a campaign, putting the morality of your PCs on the line as they travel the lands, convincing coalition soldiers who are uneducated about things to rebel or having to kill the ones who just don't get it?

Lots of potential here for a really good campaign. You should check it out.

Email ThisBlogThis!Share to TwitterShare to FacebookShare to Pinterest
Labels: RIFTS