Keep an eye out for the Charlatan… he’s loose 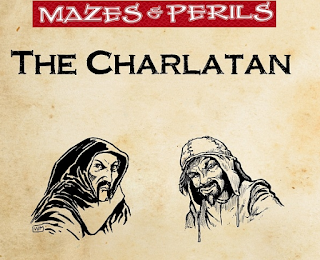 Sometimes you’ll run into a character on the street, get some juicy tidbit of information, and be on your way, only to realize later that you were had. That might be the Charlatan. He’s a bit of a con artist, spinning rumor, magical talent, and roguish charm into whatever he needs at the time. Maybe his heart truly was in the right place and he led you where you needed to be. Or maybe he had you chasing your tail to help in his fiendish scheme.

The fun part is that he’s probably skipped town about the time you realized you were played. Though in reality he may simply be in a different disguise standing right behind you in town spreading confusion about his sudden exit. You just never know, do you?
The Charlatan is able to step into myriad situations and pull a fast one over everyone from the average Joe to city guards, nobles, and, on a daring day, even some archmages. Some of these tricksters even have just enough magic in their bag of tricks to utter a bit of arcane mumbo jumbo to back up their words with a bit of razzle-dazzle. With some clever roleplaying, disguise, and ability, the Charlatan can impersonate a Magic-User, Cleric, or other magical class and get away with it. Anything is possible with the right amount of spin, a costume change, or a touch of magic!

And he’s available now for Mazes & Perils and other OSR systems. Play this fiendish fella in your next campaign and see just how much trouble you can get into (and out of) each session… What’s the worst that could happen?

Check him out now in the Moebius Adventures store or where other Mazes & Perils products are sold!
at December 06, 2016