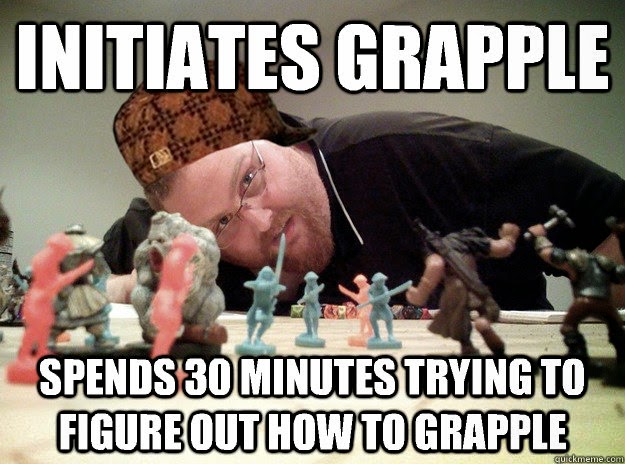 I was messing around with the idea of a quick and dirty grapple system for my games. I wanted something simple enough it can be resolved in a matter of a roll or two but not so simple one side over powers the other.

So I decided to take the method of rolling by taking the attackers d20 roll and adding any Strength bonuses vs. the defenders d20 roll +Strength bonuses as the base.
Then I decided that depending on their size you’d also roll an additional die such as:
After you roll this secondary die, you minus it off your opponents result total
Example: John is playing a Halfling who gets a d4 secondary die to his roll, while Tim is playing a human who gets a d6 as his secondary die.
-         -  John’s new total is 15 (17 total minus Tim’s d6 roll of 2)
-          - Tim’s new total is 16 (19 total minus John’s d4 roll of 3)
Tim is the winner of the grapple.
Now people are most likely saying, well what about if its small vs. Large? I decided that when its small vs. Large the secondary die totals are swapped, giving a small the d8 and the large a d4.
Of course this method is based on humanoids only and should be modified when using other sizes.
Just some thoughts.
at February 04, 2015

Email ThisBlogThis!Share to TwitterShare to FacebookShare to Pinterest
Labels: Grappling