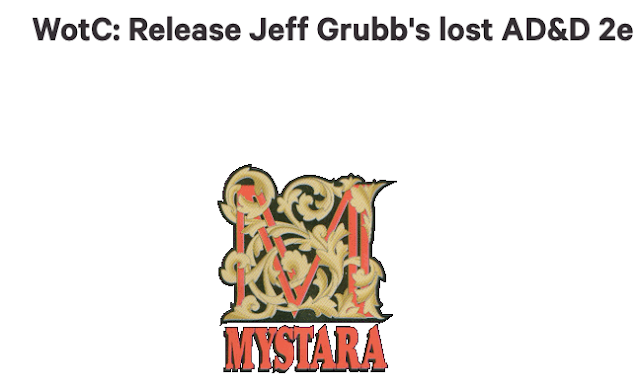 Yes, you heard me correctly!

There apparently was a Mystara book for AD&D 2e that was never released!

To Wizards of the Coast:We ask that you please release the unpublished manuscript of the World of Mystara AD&D 2E campaign setting by Jeff Grubb. We suggest either posting the PDF as a free promotional item of "historical interest" in a DRAGON+ magazine article, and/or at the Vaults of Pandius (the official Mystara fan-site), and/or posting it for sale at DMs Guild.
Thanks for considering,
-World of Mystara enthusiasts

This is what the Petition on Change.org is asking from Wizards of the Coast!

For those who just want to read:

Here's the story:
Back in 2017, veteran game designer Jeff Grubb blogged about why he left TSR. He says that the straw that broke the camel's back was how the AD&D 2E worldbook for Mystara was nixed after he'd already written it.

And here's his overview of the manuscript: "Mystara Redux".

In the manuscript, there are 54+ new kits for AD&D 2E! This is a huge expansion of the 2E kit system, and setting-wise, this document would serve as a resource for any eventual 5E presentation of the world. Some of the terminology* is unique to this document, and so synthesizes the D&D world of Mystara in a way that's never been seen before, thus significantly adding to Mystaran lore.
*(Such as the "Undersiders" kit for Rockhome Dwarf rogues.)
***

Toward this end, we wrote to Jeff Grubb (in September 2018), and he kindly replied:

Thank you for you note. Dead and unfinished projects litter the backstory of any creative, but Mystara's passing made me particularly sad. I'm afraid I already sent out my printout of the design to [the webmaster of the Vaults of Pandius, the official Mystara fansite], who asked about it a year ago. You may be able to get a copy from him. Should I come across anything else in my files, I will send you a note.Best of luck,Jeff Grubb

***
So then we contacted the webmaster for the fan-site, and he replied that he was not willing to post it, out of respect for WotC's IP, and out of concern that the long-standing official fan-site program might be somehow squelched if Hasbro's attention was brought to it. We then asked if he'd contact WotC and simply ask if he/we could post it! He said he would. But we never heard back from him, and we haven't been able to get in touch anymore. The webmaster does great work for Mystara, but there's apparently an unspoken snag. So we're bringing this out into the open for the entire community to consider...and hopefully rally behind!

***
So that's where we stand.
Whether you're a BECMI Known World grognard, or from a newer generation who's intrigued about the mentions of Mystara in the 5E books, would you consider signing this petition?

***
Update June 10, 2019:After reviewing our petition, Jeff Grubb sent a note:
I had only a hard copy, and sent it to [the webmaster of the Vaults of Pandius]. [...] If you succeed, I will be glad to provide an intro with a less-depressing history of the project.-Jeff

So if our petition succeeds, Jeff has offered to write a brand-new introduction to the 2E Mystara worldbook!

Star Wars Fall of the Order Episode 37 – The investigation continues

Watch on YouTube here: Star Wars Fall of the Order Episode 37 – The investigation continues Via https://www.youtube.com/channel/UCcZImr64...