#BuffySlays20 is trending today.. and why not celebrate along! #RPG 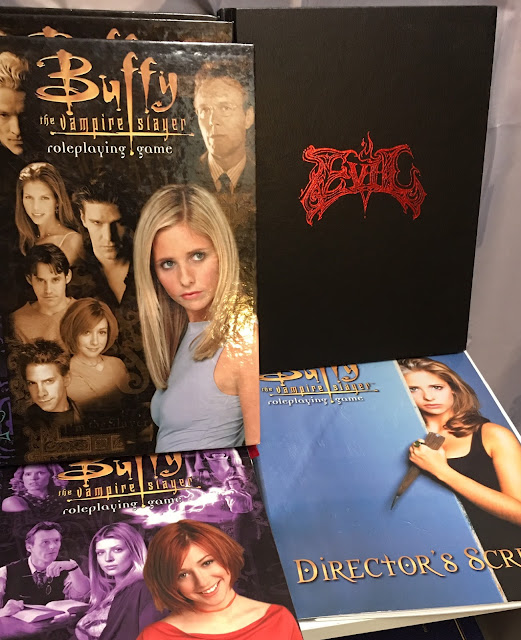 On March 10th, 1997 this little show premiered on TheWB channel all over the USA, called Buffy the Vampire Slayer.  While it had an interesting start it wasn't instantly loved by all as it is today.

The show did grow into a large following, spinning off another show from it called Angel. Anyhow, around the year 2002 Eden Studios grabbed the licensing for BTVS, and made an entire line of books that geeks around the world could dig their little paws into, creating their own vampire hunts, love scenes and whatever else they wanted.

The game itself is a really cool concept, using a d10 die, adding modifiers and then referencing a small difficulty chart.

The problem with the game, and I think it could be the reason not many played it, was that the game revolved around the Slayer character, as she was the only one who could do all the really awesome feats, take the hits and not worry about dying. The rest of the players in the group were called "White Hats" (hat tip to the olden western days of good guys wearing white hats). The white hats weren't as strong and couldn't do as much as the slayer could do (unless of course they were a witch, then things got better). Sure they tried to even things out by giving the white hats Drama Points to spend and at times it did make things fun, but when playing this, I saw a lot of players sitting back in their chairs as the Slayer wiped up the floor leaving them standing there to pick their noses.

The inside of the books are nicely done, with quotes and fonts you'd expect to see in a Buffy episode, the book is even written in Buffy Speak, using phrases directly from the show. 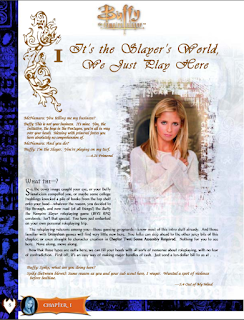 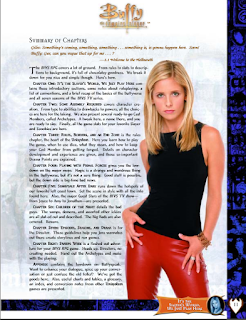 As you can see, full color books, and they looked great.

Did I enjoy playing this game? Sure.

Do I play them anymore? Nope they kind of just sit on my shelf dusting away sadly.

Well here we are 20 years later after the show has been long gone from the TV screens, but still lives on in the hearts of many fans (and some RPG fans as well!)

Email ThisBlogThis!Share to TwitterShare to FacebookShare to Pinterest
Labels: #BuffySlays20