Starting Session, skip the "getting to know you" part, everyone knows one another. 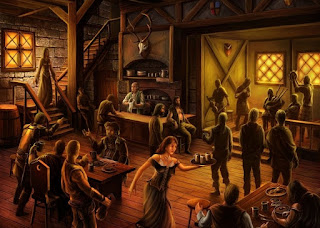 People always ask me, "why do you always skip the getting together part of the game, or drawing us all in as a group and just saying we all know one another?"

Frankly my answer to this is simple, I find it boring and a waste of time. The game is there for me to have fun just as much as the players, why not do it my way?

Most players will not really care and as long as the story is fun and engaging enough, they will just let it slide by, because well, we all know the "Getting to know one another" can lead to fights and people being people (aka ANNOYING).

I've experienced quite a few games in my day since the '80s as a DM, and I can tell you this, starting everyone out in a tavern and not knowing one another will always lead to at least one thing, one pair of characters always finding a reason to fight one another.

I'd rather spend more time in finding a better reason for the party to fight one another.

So you're asking, okay, well then how would I get the characters to know one another right away?

Its simple, when they are rolling up the characters, ask them to provide a reason they would associate or know one another.

It could be as complex as they lived next door, they played together as children, then as time passed one family moved away and they had not seen one another except for a few times at the local tavern where they had a drink or two, but never had the same relationship they had as young children playing in the meadow.

The other reason I start things off this way, because it already sets the tone of things that I as a the DM mean business and want to get to the adventure and the fun they are looking for in a game.

Heck I've seen a getting the party together session take 3 hours and its really trying on a DM, especially if you have players who like to "be a dick".

The only person at the table who should be the dick, is the DM, its our job. Its the DM vs the Characters.

So next time you think of starting up an adventure, remember all this and maybe you too will skip the "Getting to know one another" part. If you have a good group of players, they will not even care and roleplay their views and thoughts into the story as you form it.

Email ThisBlogThis!Share to TwitterShare to FacebookShare to Pinterest
Labels: starting off