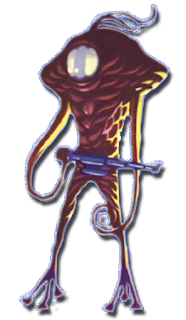 Further diving into the whole, space pulp thing for use with Mazes and Perils, I've designed up this evil world dominating creature, Alkmanian.

Evil to the core, all they care about is themselves and will enslave the Venusians, the Fearians and Earthlings to do their bidding.

These creatures once lived on a moon orbiting around Venus named Alkman and they remained content living on this moon and never leaving but a war amongst themselves lead to the moon being nearly inhabitable to the Alkmanians. The remaining survivors, bent on domination, need to seek out a new place to live and turned towards Venus, a new planet to conquer and establish colonies on.

Alkmanian Phase Rifle -
Rate of fire - 1 per round
Special - can only be fired by Alkmanian or telepathic creatures.
This Rifle has no actual "trigger" to it, and basically looks like a giant piece of metal to the average person, but in the hands of a Alkmanian, its a deadly weapon control by their telepathic abilities. The rifle will normally only do stun damage, but can be set to kill.