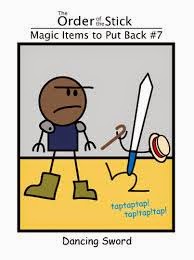 Sometimes in a game we as the DM will design these awesome looking magical items and they look great on paper, but when we give them out during game play we often regret giving them out. Sometimes these items are just killers for a campaign or maybe that one adventure you designed up for the night.
You also know the player will make sure his character holds on to it like its gold, knowing that he has an "edge" on things.
I've seen plenty of DMs who will try to take it back from the character by throwing all these monsters or even find a way for someone to steal it with a "no chance you will catch him" scenario. I had a person like that, he would give us these awesome weapons one week, and then see what havoc it caused to his game and suddenly took them away the next week. It came down to the point we just started writing things on a sheet of scratch paper to toss in the trash because we knew it was going away. Did we talk to him? Yes, did he stop? Nope.
I've also seen some DMs who will just go with it and watch the wonderful campaign he has created crumble and fall apart due to this mistake. I've seen this mostly at convention plays and some local gaming store groups. The DM just goes with the mistake and tries to ignore it, hoping the player will come to his senses.
In this situation I would talk to the player on the side and let him know of the mistake, and ask him  to kindly give it up, and maybe offer him up something a bit different in exchange. Most players will take the offer knowing that it will help the game play and the story for the DM as well as keep the fun rolling for the group. Face it, we've all been in at least one game where one character get this super awesome thing and destroys all. Its kind boring for everyone else.
As the DM, do you have the right to "clean up your mess" or "let the cards fall where they may?"
at September 10, 2014