The Evil GM - The no show player, what to do? 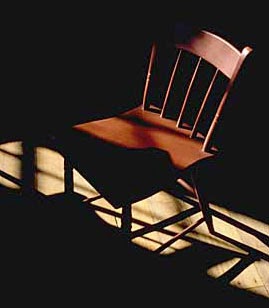 I am sure all of you have had this happen to you at one point or another as a DM or as a part of a group you play in. Most groups play once a week, some play more depending on how much time everyone has to get together. Some groups get together even less, maybe twice in a month or once a month might be the amount of time they can spare for gaming. Hey whatever it is, its sure to be the night you are most looking forward to doing. Who goes to gaming night saying, "Oh damn, its time to game.. I hate this.."

So anyhow, you are looking forward to that game and you get there only to see that empty seat of a player who normally shows. Sure it can tick you off, especially if that person didn't shoot an email, text or even call someone in the group.
Life happens. We all know this and we can't control this. BUT we can control what happens in these types of situations with gaming. There a couple of things you can do in your group to keep the fun flowing and not even notice old empty chair over there.
Establish some rules - Something the group will agree upon when you first start playing the games. If you do this upfront, there will be no questions about what to do. Now these rules could be things like:
Of these rules I've listed here are some of the things I've seen over the years and I am sure I am missing somethings. What I've done (and seen quite a bit) is option #1, #2 and #4, with #5 coming in as a last resort.
Is #6 fair? Hell no, but I remember this happening to one guy in our group when I was a player as a kid. Man was he made when he came to the next game.
What do you do?

Email ThisBlogThis!Share to TwitterShare to FacebookShare to Pinterest
Labels: the missing player