How to get your players into some RolEplaying, instead of RolLplaying. 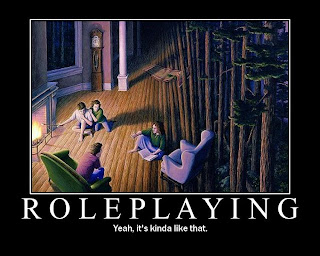 Many have wondered in forums and even asked me, How can I
get my players more involved in some roleplaying, instead of just having that
generic dungeon crawl with Bob the fighter.

Players love gold. Plain and simple. Its the reason most
players use for their characters to be questing. So why not when your players
come into town, have a carnival being held. Throw in a few carnie games where
the players still can roll some dice. Hold a simple non lethal damage boxing
match with an animal. Throw in a gypsy fortune teller. Perfect chance to
roleplay. If the players don't bite on the fortune teller, make it look
interesting. Have people coming out of the tent cheering and celebrating as if
they won something. Do it over and over as players look around. Sooner or
later, the curiosity bug will hit them. When it does, its your chance to shine
as a roleplaying DM. Have a wacky lady, in front of a table with a deck of
cards, a crystal ball, strange incense all around the room with dim lighting.
Once the player sits down and gives say a copper for their luck, you can
roleplay out some clues to your adventure. Its up to the player to write down
these things or ignore them.

Method 2: The old hermit in the woods deal

Here is another chance for a DM to shine. Give your hook for
the adventure, but make sure you leave it so that the player characters have to
seek out the old hermit that no one has seen in a long time for some help with
a map of the dungeon they plan on going to. He knows the secrets (or is he a
crackpot?).

Have your players seek him out, and convince him to help the
group, and give up the information. A group that threatens the old hermit will
get nothing, because he has nothing to live for as he says. Killing him will
gain nothing, because only he knows the secrets and must draw them out for the
party.

So there is two tips for a DM, What ideas do you have to share with us?