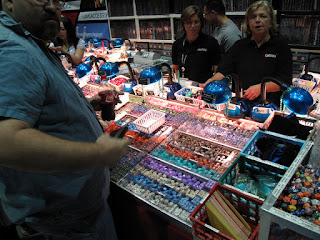 Here is a topic that comes close to everyone's heart while gaming, their dice and how they are treated. Now I've been gaming a many of years and never once did I ever feel the need to follow such steps or be this protective of my dice. Yes, there are people who are very protective of their dice and to the point of throwing out a dice set if someone else touches or uses the dice.


There is a known (sickness?) called Obsessive-Compulsive Dice DisOrder (OCDD), that almost 90% of gamers have. This disorder can go as far as people lining up their dice in a certain order before the game, during the game, after the game to make sure the dice roll well. I have seen people accidently misplace or lose a die, get very upset to the point of shaking and in tears trying to find this die they lost.


Myself, I have my bag of dice, which I have my favorite set of it, its my black and dark gold set. I normally pick out that set of all the dice and place it to the side of the rest of the dice to use during the game. I don't get upset if the dice mix up with other dice or the dice is touched by someone else. The only thing I worry about is that I don't lose the dice. IF I do happen to misplace the dice, I get annoyed, but I just sub in another die. In fact you will hear me during games, often switching out dice as I get bad rolls, just to change it up a bit.

I had a friend who I used to play with that, if you touched his dice and he would flip out to the point that he would get violent, start swearing and even physical. This person even would question the group if he had a bad night of rolling, saying "Someone touched my dice didn't they?"

Here is another thing I've seen people do and often read about.. I lose my dX, what do I do with the set? Retire it? Replace the dX ? I don't want to use a "broken" set, (It is broken because one of the dice are missing.)

I am sorry, I just don’t see it. I have dice, and I just swap them around and use them as needed. There is no magic in the dice, there is no special thing about it and certainly if X touched it, it will not roll well for me. The roll and fall where it falls based on various formulas and angles, much of which I could careless to talk about.

So, basically my point is, people seek some help, and just enjoy playing the game and don’t obsess over special dice.
at April 05, 2011

Email ThisBlogThis!Share to TwitterShare to FacebookShare to Pinterest
Labels: dice