A screen is needed! 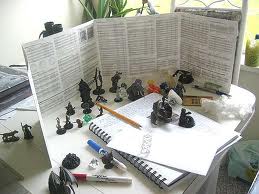 This is topic that often leads to me getting annoyed, but hey it needs to be covered.

Should a DM have a screen in front of them to hide their notes and rolls?

But let's first cover the reasoning behind the people who don't use a screen, and I notice people do this more in later editions that earlier editions.

The main reason I've heard or read was that "they like to keep their players informed and the rolls honest."

They believe it keeps the game fair and balanced. Where the die rolls is what happens.

This method will sometimes get your well planned game in trouble, or even ruin the fun for players, because you will kill them.

The old school method (and my method) and this was even stated in the books for DM's to use a screen to roll behind, so you can fudge numbers when need be. Because seriously as a DM, wouldn't you want to roll that D20 and get a 20, with your last player standing with 5 hit points and say, "fumble! DAMN!" or have it out in the open roll the 20 and have to kill the last man standing.

Which do you pick?

I know I'd pick the screen method so I can fudge the roll, because while its fun to kill characters, its not fun to wipe out a group and have to start over.

I like to think of a DM as the host of a party, and your players are a guest. As the host you provide the place, the entertainment and ways to get food/drink. As a DM, you do the same thing, you provide the places (the starting town/Quests), the entertainment (hooks, plots, NPCs, Monsters..) and ways for your players to socialize (shops, taverns..Etc)

Honestly, how much fun is it going to a party where there is three chairs out and a bowl of popcorn out, with the host ignoring you?
at April 06, 2011