The book of pure evil! 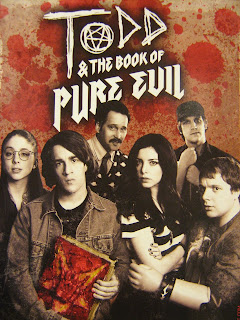 So I've been hooked on this low budgeted TV show from Canada, called Todd and the book of pure evil, thanks to a player in my online group, Terry. The show at first I thought was a bit lame, but after watching the first five episodes, I am really hooked on the show. The show is like a Buffy the Vampire with a mix of Saved by the Bell in it. Take out all the mushy romance Buffy had, and add in cursing, and various camera shots that show off various character's bodies, and then add some silly stoner humor in there.

Basically the show goes like this, Todd, Curtis, Jenny, and Hannah are students at Crowley High, the only high school in a small town secretly founded by Satanists. After encountering a cursed magical tome with a mind of its own, the Book of Pure Evil, which grants the wishes of those who hold it in dark and sinister ways they didn't intend, they team up in an attempt to track down and destroy the Book, although it has an unfortunate tendency to fly away after its spells are undone. Each episode revolves around a student at Crowley High using the Book to try and make their life better, though this usually results in chaos, mayhem, and bloodshed at the school. Todd and his gang then fight against whatever the Book has done, and try to keep Crowley High from being totally destroyed. Supposedly friendly school guidance counsellor Atticus Murphy helps them in their quest to destroy the Book, though secretly he is a member of the cabal of Satanists who run the town from behind the scenes, and has been tasked with returning the Book of Pure Evil to the leader of the cultists, who happens to be his own father.

So the episodes are a bit silly, but the cast does a good job of pulling you into the story. So far there is only one season... but there is another one in production. Sadly, the website for this show there is a problem watching the show, so you have to jump on youtube.com or download the show to watch it until its fixed.
Overall 4.5 out of 5... Let's use on the Evil Scale. If reading this doesn't convince you to try it, the show has Jay Mewes in it as the every-so-ready to give advice janitor....
Todd and the book of pure evil
at February 22, 2011