combat is too hard? lol 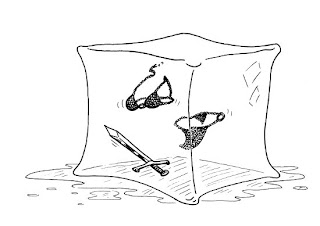 Some newer players looking back onto AD&D 1e or B/X D&D, are unsure how the combat system works. Maybe because they are used to the way the AC system works in 3E and 4E. Their system is ascending for better while old school is descending for better AC. The question I often get is "how do I know if I hit?" Well in 1E, players were not really allowed the information of the "to hit" numbers, thus why it was printed in the DM Guide. Players were only to, roll add or minus whatever number, and tell the DM. The DM who had the AC and the to hit chart would compare. B/X gave the players a little two hit chart they could see when building their characters, so players had an idea that what roll would hit what AC .
I've never played in an old school game where the DM gives AC out at all. Generally by the "hit or miss" theory, a player figures out what it takes to score damage on the monster at hand. This is how it should be.. but I think 3E introduced an era of Laziness on the part of DMs. Now I am not bashing 3E or 4E, but for some reason, DMs started giving out the AC, and I noticed this, as when I was in these group, players would automatically, when attacking, say, "AC?" and the DM would tell them. I've know players to get annoyed at at DM who said "just roll"

So I guess its up to the lazy DM to enforce the proper rules..

Anyhow, onto how to figure out if you hit. Basically its simple. The player rolls his D20, adds/minus' whatever modifier and gives the DM the final result, the DM will them look at the combat matrix chart for whatever character class, and see if that number hits the armor class. Its a basic cross reference thing. With sometime a DM can just know what number hits what for what class.

"That's stupid, why do that, everyone should have one method!"

No they shouldn't not everyone was able to fight with a weapon the same way. A Magic User doesn't know how to swing a sword or handle a dagger like a trained fighter would. A cleric may train a little to be in battle, but their main focus was in casting spells given by their god, spreading the word of their god through worship and then beating the hell out of things in the gods honor. A thief is used to sneaking around, trying to figure out a way to attack someone, so their focus is ways of sneaking around, using the distraction of the fighter beating on the foe, for a chance to get a perfect stab in.


I believe the reason the various hit charts slowly went away as the editions increased was to make things simpler for the DM and the players. I know with 3E and the D20 system they were trying for a faster combat system and one that a player or a DM could easily figure out if it was a hit or a miss. I don't think it really made it any easier, it just made certain classes "boring" to play. Such as a fight became so boring, as they had one great thing going for them, they could jump into battle and beat the hell out of things, hitting more then everyone else, but the "one hit system" 3E introduced took that away. Now a wizard or rogue can hit just as easy as a fighter can.


All I can say, is oh well. Long as you have fun, enjoy. Don't bash my system I grew up with, that was "rules lite" because you don't understand it or think D20 rules are better.
at February 25, 2011